DALLAS -- Dallas Airmotive, a BBA Aviation Global Engine Services company, announced today that its new test facility at Dallas-Fort Worth International Airport has been correlated for Pratt & Whitney Canada (P&WC) PW200 series engines and Rolls-Royce M250 and RR300 engine lines. It is certified and has begun to test rotorcraft engines.

“This is a great milestone for our new test center at the DFW Airport and our rotorcraft program,” said Mark Stubbs, BBA Aviation Global Engine Services Chief Commercial Officer. “With these certifications, we can deliver full MRO and test capabilities from our Dallas facilities to our growing base of rotorcraft customers throughout the Americas. This state-of-the-art facility is one of a kind and our rotorcraft customers will experience quicker engine shop visits.” 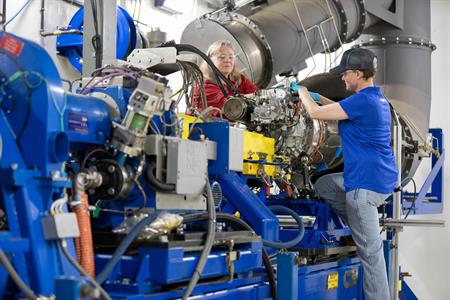 Dallas Airmotive is the only P&WC Designated Overhaul Facility (DOF) for the P&WC PW200 and PW210 engines in the Americas. The company’s full line of rotorcraft authorizations include P&WC PW200, PW210, PT6T engines and Rolls-Royce M250 and RR300 engines. With the new test facility certified and online, all rotorcraft operations for customers in the Americas will be centralized at Dallas Airmotive’s facilities in Dallas, Texas.